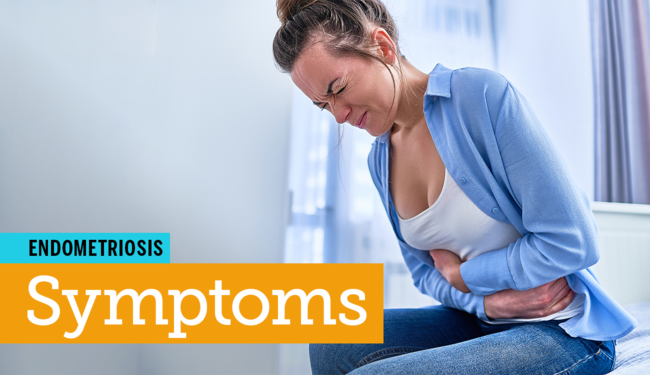 Endometriosis symptoms are caused by inflammation, the growth of endometrial implants on and into pelvic organs and structures, and adhesions between surfaces in the pelvic cavity.

The primary symptom of endometriosis is severe pelvic pain, typically associated with menstrual periods. While many women experience cramping during their periods, women with endometriosis typically describe menstrual pain that is far more intense than is normal.

Where and how the pain is experienced depends on where the disease is active in your body. Nearly every woman with endometriosis describes painful periods that include pelvic pain and cramping beginning before a period and lasting several days. Pain may be felt in the lower back or the abdomen. Women with endometriosis often feel pain during or after intercourse.

Some women with endometriosis feel pain much more frequently, or even continually, at times unrelated to menstruation or intercourse.

Heavy menstrual flow and bleeding between periods may occur in women with endometriosis, often when adenomyosis is also present. Excessive blood loss can lead to anemia, a lowered level of red blood cells.

Pain that comes with bowel movements or urination may indicate that endometriosis is affecting the intestines or bladder. Endometriosis can also cause frequent urges to urinate. Bowel involvement can also cause gastrointestinal problems such as diarrhea, constipation, bloating, or nausea.

Endometriosis is sometimes diagnosed in women seeking treatment for infertility. Approximately 60 percent to 70 percent of women with endometriosis have no problems becoming pregnant. Among those who do experience difficulties or delays, about half are eventually able to conceive. However, endometriosis may cause infertility if the fallopian tubes become blocked by scarring or implants, the ovaries are affected by endometriomas (blood-filled cysts), or if scarring or adhesions distort the reproductive organs.

Endometriosis also causes general symptoms that involve the whole body, such as fatigue, depression, and anxiety. Chronic fatigue is caused by inflammatory processes in the body and can also be a result of anemia due to blood loss. Depression and anxiety are common in endometriosis and other chronic illnesses.

Some level of cramping and pain during periods is normal and can generally be lessened with over-the-counter pain medication, such as Advil (Ibuprofen) or other nonsteroidal anti-inflammatory drugs. Painful cramping due to endometriosis, however, is much more severe. These intense cramps can be associated with heavy, prolonged menstruation and can include blood clots. They may start out feeling like normal menstrual cramps, but the level of pain can suddenly get much worse. Often these severe cramps occur during ovulation in addition to menstruation.

At What Age Do Endometriosis Symptoms Appear?

Most women start to show early symptoms in their teens. Some girls begin experiencing endometriosis symptoms as young as age 11. However, it can take many years for a woman to be correctly diagnosed. Read more about endometriosis diagnosis.

Do Endometriosis Symptoms Go Away?

Endometriosis symptoms may improve during pregnancy, but they often return after giving birth. In the majority of women, endometriosis disappears after menopause. However, the body continues to produce some estrogen after menopause, and some women continue to experience symptoms.

Read about treatments for endometriosis.

Kelly Crumrin is a senior editor at MyHealthTeams and leads the creation of content that educates and empowers people with chronic illnesses. Learn more about her here.
hug (10) like (20) comment (6)
sign up to view previous comments 1 of 6

Abdominal pain and bloating is common in endometriosis particularily if you find you are experiencing this close to menstraution and ovulation…although it can happen more frequently. It is often a… read more