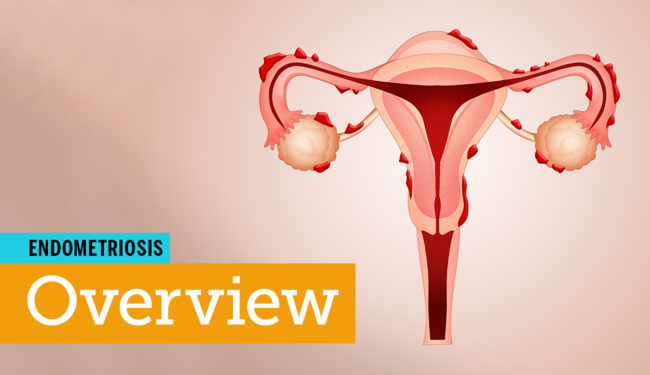 Endometriosis often goes unrecognized by doctors or is misdiagnosed and incorrectly treated. Endometriosis can have a profound impact on quality of life, including work, education, relationships, and the ability to conceive. Endometriosis can be particularly disruptive during a woman’s period. A woman with endometriosis may suffer for many years before obtaining the correct diagnosis, as symptoms can be confused with pelvic inflammatory disease (PID), irritable bowel syndrome (IBS), fibromyalgia, and other illnesses. Diagnosis may be further complicated by the presence of multiple chronic conditions.

The endometrium is the lining of the uterus that builds up each month, breaks down, and sheds during the menstrual period. Endometriosis occurs when tissue similar to endometrial tissue exists outside of the uterus.

Endometrial tissue growing outside the uterus develops into growths (also called implants or lesions) which respond to the menstrual cycle. Like the lining of the uterus, endometrial growths are affected by the hormonal changes that bring about menstruation.

Research has now shown a link between genetics and endometriosis. When the genes which code for endometrial tissue are working differently, endometriosis becomes more sensitive to estrogen and also triggers the body to produce large quantities of prostaglandins, a group of lipids made by the body during tissue damage. These prostaglandins initiate inflammatory responses in the abdominal cavity. This results in inflammation that causes pain, scarring, adhesions, infertility, and other problems. Read more about the causes of endometriosis.

Where Can Endometriosis Occur?

The History of Endometriosis

Throughout history, the symptoms of severe, chronic pelvic pain in women were often attributed to mental illness, demonic possession, or promiscuity. Hysteria, which means “of the womb” in Latin, was a common diagnosis for many women who complained of pelvic pain. Pregnancy was considered a cure for dysmenorrhea (painful periods), and women with this complaint were typically encouraged to marry and get pregnant as soon as possible. In cases where ancient doctors did recognize endometriosis symptoms, such as pelvic adhesions (fibrous scarring that connects organs or tissues, causing pain), they prescribed preparations containing the urine of men or bulls, tar water, castor oil, or the secretions of the blister beetle. These treatments could either be swallowed or inserted vaginally. Leeches were also a popular treatment for gynecological conditions.

In the 1920s, Canadian gynecologist Thomas Cullen first identified and described how endometrial implants are associated with disease activity. In the 1940s, new techniques in endoscopy allowed doctors to better examine and visualize what was happening inside the body in cases of endometriosis. The first birth control pill became available in 1960, and the age of hormonal treatment for endometriosis began. Treatment for endometriosis further improved in the 1970s, when laparoscopic surgical techniques gained acceptance. Laparoscopic removal of implants and adhesions lowered the risk for surgery-related complications and made for much faster healing.

Modern research into endometriosis is focusing on new and better treatments and possible ways to prevent the condition from developing.

How Common Is Endometriosis?

Approximately 176 million women worldwide are impacted by endometriosis, and an estimated 1 out of 10 women of childbearing age suffer from the disease in the United States. It is impossible to know how many women remain undiagnosed. Endometriosis mostly affects women in their reproductive years, especially between the ages of 25 and 40, but can develop in girls as young as 11.

Symptoms from endometriosis generally disappear after women go through menopause. Pelvic pain which persists after menopause warrants further evaluation to determine its causes.

What Are the Stages of Endometriosis?

There are four stages of endometriosis: minimal, mild, moderate, and severe. Stage is determined by the location, amount, depth, and size of the endometrial implants.

Can I Get Pregnant if I Have Endometriosis?

Some possible reasons for this infertility include:

Is There a Connection Between Endometriosis and Endometrial Cancer?

How Is Endometriosis Diagnosed?

What Are the Symptoms of Endometriosis?

Symptoms of endometriosis may include excessive menstrual cramps, back pain, abnormal menstrual flow, pain during intercourse, chronic fatigue, infertility, and painful bowel movements or urination. It can also include bloating and gastrointestinal issues, like nausea, diarrhea, or constipation. Learn more about endometriosis symptoms.

How Is Endometriosis Treated?

Depending on the severity of the symptoms, treatment for endometriosis may include pain medications (over-the-counter or prescription), hormonal therapy (oral contraceptives or injections), or surgery (laparoscopy, laparotomy, or hysterectomy). Read more about endometriosis treatments.

While symptoms can be similar, the underlying root cause of these conditions is different. Endometriosis develops outside of the uterus. Adenomyosis is limited to the inside of the uterus. A notable difference is that adenomyosis symptoms most often start late in the childbearing years, after having children. Read more about the differences between endometriosis and adenomyosis.

posted over 1 year ago

Kelly Crumrin is a senior editor at MyHealthTeams and leads the creation of content that educates and empowers people with chronic illnesses. Learn more about her here.