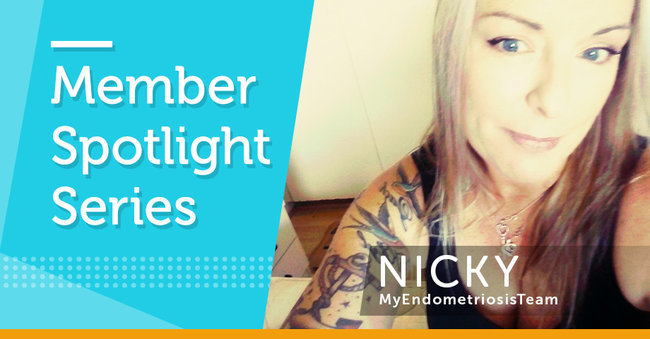 I had all the symptoms; I knew what was wrong. My mother suffered with endometriosis for years. I was fed up with doctors telling me to go on this pill and that pill, or that I am exaggerating, and “Your periods and the pain are normal.”
I spent so many years trying to tell someone, anyone, that something was wrong. No one was listening to me. Finally, I was diagnosed with endometriosis following a laparoscopy in 2012. I waited years for this. Finally I knew it wasn’t in my head. Little did I know back then that this was only the beginning of a grueling, nightmare battle I have now come to face today.

Since 2012 I have now had four surgeries to rid my body of the pain that has taken over my life in so many ways. At first it was pain I felt usually a day before my period and then continued for the next three days. Hot water bottles and pain relief became my new best friend for that week every month.
The last three years have been the worst for me. And even though I have been on the Depo-Provera injection and have not had a period in many years, I have now gotten used to severe 24/7 pain. If getting used to it is even a thing.I was once a very cheerful, outgoing woman, the life of any party. I would never say no to going out on a girls’ night. My typical Friday night now is spent curled up in bed with a heat pack and a bag of lentil chips watching yet another series on Netflix.The impact this horrible disease has had on my life has been nothing short of a horror film from the Twilight Zone, and I am sure anyone reading this right now would have to agree. We could write a best-seller based on what we have to deal with every day.No one ever seems to understand the pain; it’s not something you can see, not like a broken leg that you can bandage.I was forced to give up my job, something I loved doing. So I struggle to manage my finances each day. I can’t socialize like I once did. Firstly, I just don’t know when the next flare-up will happen. Secondly, alcohol doesn’t agree with my disease, as it sends my pain through the roof and straight to the emergency department. And thirdly, I have depression. I was diagnosed with severe depression due to dealing with so much pain on a daily basis.
So I don’t work, I don’t socialize, and I don’t talk to my friends and family about what I am going through because, well, they just don’t understand. My mother, even though she suffered with endometriosis, doesn’t believe the pain I go through is real. She’s convinced that I am “overreacting” as she didn’t suffer the pain and isolation I do.
I am currently seeing a therapist and it’s helping me deal with the issues I have been going through over the past few years. It’s nice to finally be able to talk about my pain, both physical and emotional, without judgement and criticism. To be heard, and not have to hear, “but have you tried this? I heard it worked for so and so,” or “maybe you should try this.”Trust me, I've tried it all!Endometriosis is found in one out of 10 women. In some women, it’s mild and can be an inconvenience, but then in other women, it literally takes over their lives—physically, mentally, emotionally, and financially.It just pains me to think that so much more needs to be done and so much more needs to be said about what endometriosis is and what we can do to try to fix this issue. A band-aid just doesn’t cut it, and that’s all there is at the moment—a band-aid. Not to mention the Australian government’s support, or should I say lack thereof. If you’re a woman suffering from severe endometriosis in this country and you can’t work, you’re on your own. There is no government payment because in this country endometriosis is not classed as a disability, and there’s no payment out there for anyone who’s not able to work while they wait for surgery. We all know how long that can take... You either work, or you starve.Recently, joining MyEndometriosisTeam has been the second-best thing I have done, therapy being the first. Being able to talk to other women who are just like me, no judgement, no sighs, and I feel so free talking about my daily issues and struggles. I absolutely love connecting with everyone there. I've not met anyone face-to-face, but somehow I feel like I am talking to the best family I could have ever asked for.
I recently found out that there’s a big possibility that I have adenomyosis as well, and have been told I will have a hysterectomy/excision on May 1. I’m hoping that this will help at least for a little while so that I can finally start my dream job in aged care.They say life begins at 40. I had to wait a few extra years for this to happen. I guess only time will tell if this is the beginning of something new or just a break from what’s become my reality. Hysterectomy does not cure endometriosis, guys. There is no cure yet.This article was written by MyEndometriosisTeam member Nicky Britten as part of the Member Spotlight Series. Nicky is 41 years old and was diagnosed with endometriosis in 2012.Do you want to be a part of the MyEndometriosisTeam Member Spotlight Series?Let us know here: support@MyEndometriosisTeam.com

Definitely get a new doctor and another opinion. You know your body.